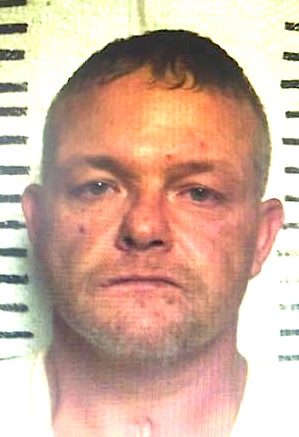 From the Garvin County Sheriff’s Office

The search for a Garvin County man who assaulted a Paoli Police Officer ended Tuesday morning after he was spotted in Elmore City.

During the traffic stop, Hutchings was informed that Wykoff had a valid felony warrant for his arrest.

As Hutchings went to arrest him, a fight ensued. Wykoff pulled a large knife during that altercation.

Hutchings unholstered his service weapon, causing Wykoff to jump inside of his truck to flee the scene.
Hutchings was able to retreat back to his patrol vehicle before being struck by Wykoff’s vehicle and attempted to pursue Wykoff.

Wykoff placed his vehicle in reverse and backed into the patrol vehicle at a high rate of speed, causing major damage.

Wykoff realized Hutchings was still chasing him, so he locked up his brakes and put his vehicle in reverse; attempting to ram the patrol vehicle a second time before leaving town limits.
The patrol vehicle was disabled and unable to pursue at that time.

Hutchings was taken to the hospital where he was checked out and medically released with minor injuries.

K9 Lion was also inside the vehicle but was unable to get out during the fight.

An arrest warrant was issued for Wykoff in Garvin County.

Wykoff was then noticed in Elmore City on Tuesday morning, June 25.

According to Cook, a person in Elmore City spotted a truck Wykoff allegedly had stolen and notified the Elmore Police.

Officers investigated the report and found Wykoff in a residence in Elmore City.

Wykoff fled from the house when officers attempted to arrest him. He was finally apprehended by a Garvin County Sheriff’s Deputy.

According to Cook, officers from McClain, Murray and Garvin counties, the Oklahoma Bureau of Narcotics and the U.S. Marshals took part in the capture.