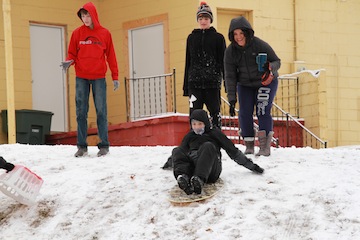 The two to 3 inches of snow Wednesday provided a winter playground for many Garvin County kids. (Photo courtesy of Doug Strickland)

Garvin County residents hoping to see a little snow this winter season got their wish this week as a major winter blast hit the area Wednesday dropping more than two inches of snow.

Weather forecasters predicted the county would receive between four and six inches of snow, but as of press time Wednesday, the area had received sleet and ice, accompanied by between two and three inches of snow, with the possibility of more snow to follow Wednesday afternoon.

The storm caused all school districts in the county to take precautionary measures on Tuesday and cancel school for Wednesday.

Officials at the Garvin County Courthouse waited to see how bad the weather was going to get before making any move to close the courthouse.

“We are going to ‘watch it’ hour-by-hour and as soon as we see an impact to the county roads and driving conditions we will make a decision,” Garvin County Emergency Director David Johnson told the News Star Tuesday night.

As of Wednesday morning the decision was to open the courthouse one hour late.