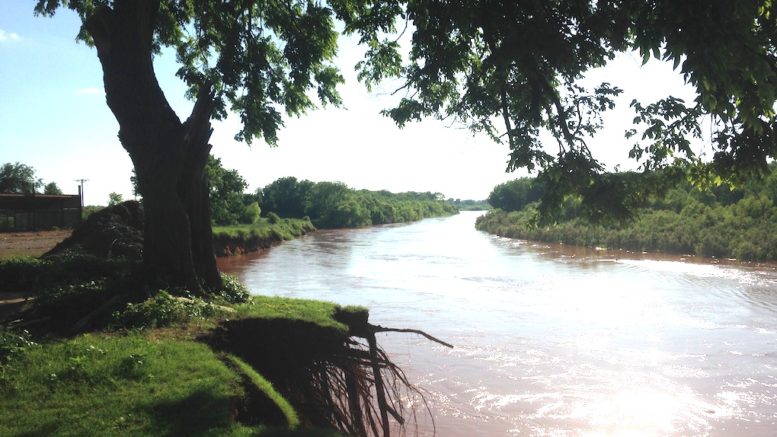 On a still night Jess and Cindy Wilmot, Maysville, can hear the Washita River flow past their farm home located between Maysville and Paoli.

But that scene is far from idyllic as the Wilmots can hear the river destroying large chunks of their land as it creeps closer and closer to their home.

“When we moved out here in the mid 70’s the river was about a mile away from the house,” said Cindy. “Now it’s about 50 yards away from our home.”

Heavy rainfall up stream has forced the river to gouge out many farmlands along its path over the years.

“It’s upsetting to hear large chunks of our property falling into the river. It sounds like there’s bombs going off,” Cindy said tearfully.

The Wilmots have had to face the reality that the river is one day going to take their home. They just don’t know when.

“If it gets up to the well house and light pole, then we’ll have to go cause you can’t live in a home without water and electricity,” said Jess.

“Sometimes I wish the house was hit by a tornado and get it over with,” Cindy said. “It’s just wearing on our nerves just waiting,” she added.

Jess and Cindy have contacted their homeowners insurance about the river’s damage but were basically told the impending disaster was an act of God.

“They said the river was basically moving soil and we weren’t covered for that,” said Cindy.

Meanwhile the Maysville couple has already taken apart a barn that was going to fall victim of the river if nothing was done about it.

For right now they are staying in their home and the river has gone down some. But that is not calming any nerves.

“It’s horrible just waiting on what looks like the inevitable,” Cindy said.