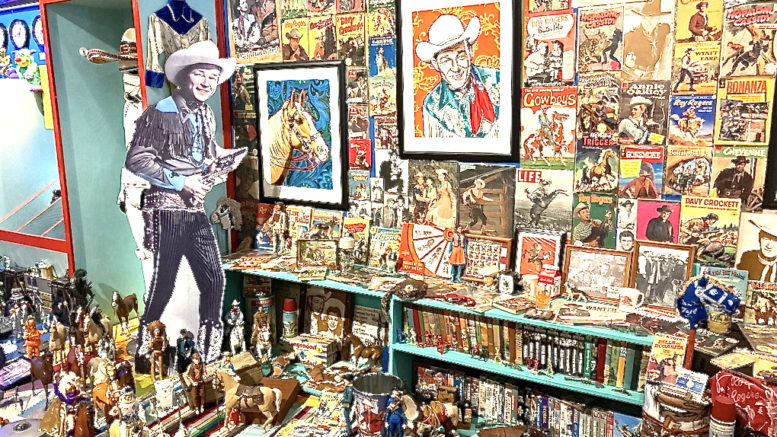 The new “Space Cowboys” exhibit will welcome visitors of the Toy and Action Figure Museum when it re-opens soon. The museum has been closed since March due to the COVID-19 pandemic. Museum officials are hoping conditions will allow them to reopen soon. (News Star photo by Jeff Shultz)

After being forced to shut down for several months due to the COVID-19 pandemic, Pauls Valley’s Toy and Action Figure Museum is ready to open its doors here in the near future.

“We’ve been getting flooded with calls asking when we will be reopening,” Museum Curator Kevin Stark said.

The months of March through May are usually busy months for the museum, beginning with spring break in mid-March.

Museum board members used the downtime to plan some new exhibits and put social distancing policies in place for when the museum reopens.

“The safety of our visitors is a priority,” Stark said. “Based on the square footage of our building, we figure we can have 30 visitors in the museum at one time and provide social distancing.”

The museum will also have masks available to visitors if they want to wear one.

Museum board members have also fully cleaned the exhibits, sanitizing the railings and other areas visitors may have contact with.

One big change to the museum was eliminating the children’s play area and replacing it with a new exhibit.

“We don’t want the kids to get sick while they are here,” Stark said.

The new exhibit is a large one titled “Space Cowboys.”

Half of the exhibit is filled with old western action figures and memorabilia, while the other half has science fiction characters in it.

The museum has expanded its Simpsons display and added a sports-related exhibit full of sports action figures.

And there is another new exhibit that is dear to Stark’s heart.

“This is the one that started it all,” Stark said, looking over a grouping of action figures in a glass case.

“I started collecting action figures after getting these toys,” he said.

Years later, Stark’s massive collection was the spark for an action figure museum that has grabbed national and international attention.

This year marks the 15th anniversary of the museum’s opening.  The popular tourist attraction will celebrate that milestone in October.