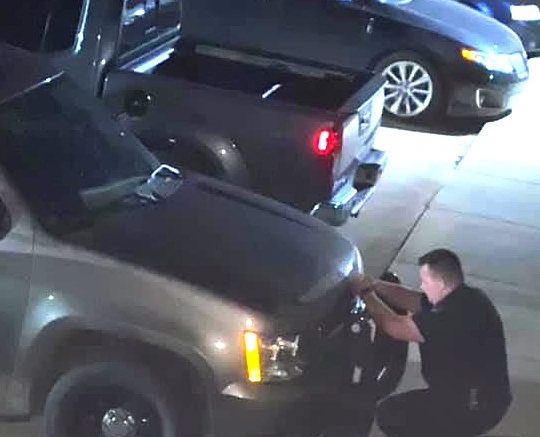 Pauls Valley officer Ty Hignite praying before his shift last week. The photo, snapped by his fiancé, spread across social media with over 1,000 shares. (Courtesy photo by Karmen Nalley)

A Pauls Valley police officer was recognized for his faith last week, amid nationwide protests over police brutality.

A photo of Pauls Valley officer Ty Hignite praying before his shift was shared over 1,000 times on social media.

“I was locking the doors behind him as he left, and I checked out the window to make sure he got in his car safe and sound,” Nalley said.

That’s when she saw him praying.

“It was such a beautiful moment to capture,” she said. “I have seen him pray before his shift many times, but I finally got the opportunity to capture it.”

Nalley said the scene “swelled her heart,” and she couldn’t help but share it.

“Ty puts God first in everything he does and lets God steer him through everything,” Nalley said. “Ty’s faith impacts every part of his life. I believe that his faith is what has given him the passion to live the life of serving others.”

Hignite’s faith accompanies him on every shift.

“Ty is a good cop who truly values everyone and their opinions, views and ideas,” Nalley said. “Ty has never and will never judge someone for anything other than their character and what’s inside their hearts.”

Hignite has been employed at the Pauls Valley Police Department for a year and a half.

“I wanted to follow in the footsteps of my father and brother and serve my community as graciously as the two of them did,” Hignite said. “I have always had a passion for helping others. I try to do my job with God’s purpose in mind.”