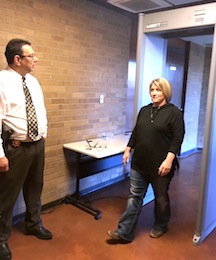 The Garvin County Sheriff’s Office is taking a proactive stand on courthouse security, meaning there will be some changes to the courthouse that both employees and the general public will have to adjust to.

“These are steps we are taking to ensure public and courthouse safety. These are measures that have to be taken with all of the active shooter incidents in the nation,” said Garvin County Sheriff Jim Mullett.

Mullet said, while no credible threats have been made to the courthouse, he hopes the security measures his office is taking will prevent any possible future threats.

“This has been needed for a long time and we (the county commissioners and Mullett) felt now is the time do it,” Mullett added.

One of the first changes will be to the entrances of the courthouse.

Mullett said he plans on locking the doors located on the east, west and south sides of the main courthouse, which will mean the only public access to the courthouse will be the two entrances in the annex.

“We will have deputies stationed at both sides of the annex and there will be metal detectors at both entrances as well,” he said.

Also, all courthouse employees will have security badges to prove their identity when entering the courthouse.

“We will have a strict policy of no guns or knives brought into the courthouse, which is why we will be installing the metal detectors,” Mullett said.

If someone is caught with a gun or knife they will be asked to take the weapon back to his or her car, Mullett added.

Mullett said the security measures should be in place by February 1.