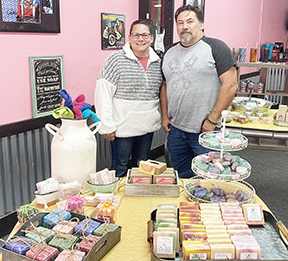 Jennifer Lowery, left, and her brother Rich Johnson proudly display some of the goat milk soaps they offer at Rock-A-Billy Goat Milk Soap. The company is a new business in Pauls Valley. (News Star photo by Jeff Shultz)

A child’s skin rash opened the door to a unique soap company that has recently opened its doors in Pauls Valley.

When Rich Johnson and his wife, Patricia, were blessed with a child it wasn’t long before they discovered their little bundle of joy was allergic to common brands of infant formula.

“He couldn’t drink normal milk from the bottle, and he developed a skin rash on top of that. The only kind of milk he could drink was a can of special milk that cost around $150,” Johnson said.

The couple was distraught over how to care for their child until someone suggested using goats milk.

“He really liked it, and it was much better for him,” Johnson said.

They decided to try goats milk soap on the boy, and his rash cleared up in a few days.

“We started raising goats and making our own goats milk soap,” he added.

And that’s how the Rock-A-Billy Goat Milk Soap company got its start.

The couple lived in Colorado at the time, and their little goat milk soap business started small with Patricia going to trade shows and selling some bars of soap online.

“We had quite a bit of inventory built up, but we had to put a temporary halt to the business due to my wife’s cancer treatments.

When Patricia was eight months pregnant with their son, she was diagnosed with cancer.

She succumbed to the disease this past April.

“Right before she died she was wondering if my sister, Jennifer, would be interested in taking over the business,” Johnson said.

Jennifer Lowery didn’t hesitate at the offer and the siblings went into business, moving it to Pauls Valley, where Lowery lived.

“We found this building and decided to open a brick and mortar store,” Johnson said.

Located at 119 W. Joy, the Rock-A-Billy Goat Milk Soap company has been open since August and offers a wide variety of soaps, lotions, bath bombs, beard oil and other gift items.

The unusual name for the store comes from Johnson’s love of rockabilly music.

“When we first started keeping goats, I’d get up early in the morning and go out to milk our goats. I would listen to anything from country to heavy metal,” he said.

Johnson said his doe didn’t like his taste in music and would be restless during the time he was with her.

“Then one morning I put on some Stray Cats music followed by Elvis, and she was as calm as ever and didn’t give me any problems,” he said.

From that time on, every time he would milk the goats he put on rockabilly music.

So, when it came time to put a name on their business cards, the choice was simple.

The store is decorated with an assortment of rockabilly memorabilia.

Goats milk soap is made from pure goats milk and has no harsh chemicals or preservatives in it.

The brother and sister team works together to make each batch of soap. The soaps are scented with essential oils and come in an assortment of fragrances, including more masculine scents for men.

They have to keep close tabs on their inventory, as it takes up to six weeks to make one batch of soap.

“It doesn’t take that long to make a batch of soap, but it has to cure for six weeks before it can be used,” Lowery said.

They also are in the process of adding liquid goats milk soap to their line of soaps.

Goats milk soap is a gentle cleanser and is ideal for some people suffering from eczema, Lowery said.

Lowery and Johnson are also experimenting with adding a line of goats milk laundry soap, shaving cream and dog shampoo.

The business is owned by Jennifer, a member of the Cherokee Tribe, and is a minority owned business.