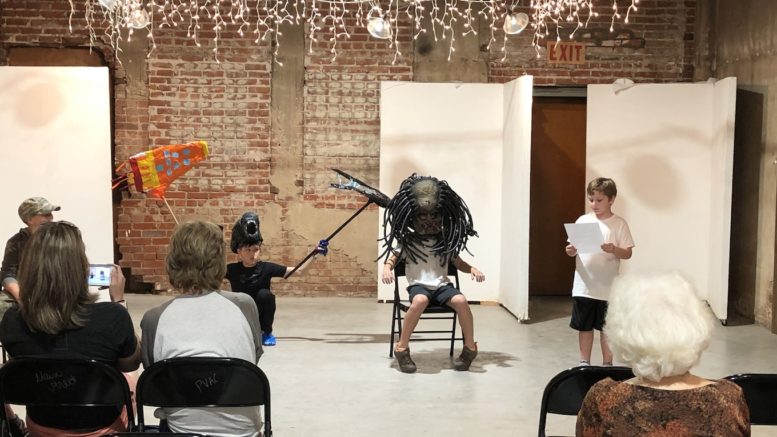 The first ACT (Arts Council Theater) Workshop was a huge success!  We had four very creative boys (ages 7 – 12 years) who shared what they learned throughout the week and performed a short skit that they created themselves for family and friends this last Saturday.

Instructors, Rita Hines-Fryar and Penny Kennedy-Parker spent each morning from 9:00 a.m. – noon, teaching the students exercises in rhythm and memory, along with guidance in the student’s skit creation.

Rita Hines-Fryar commented on how eager and creative the boys were and now much fun the parents had in the preparation of props.

These workshops are providing a much-needed opportunity for people, young and old, to learn theater and share their talent and skills.

The Pauls Valley Arts Council’s theater group, ACT, will be performing their first production for the 2019-2020 season this coming August 23, 24, and 25th.

The play is “Dearly Departed,” and will be directed by ACT Director, Renee Mackey-Myler.

We will be holding auditions for “Dearly Departed,” on June 24th and 25th from 6-8 pm at the Pauls Valley Arts and Cultural Building at 220 W Paul

“Dearly Departed” was deemed as “drop dead funny” by the NY Daily News.

The story is about the beleaguered Turpin family who lives in the backwoods of the Bible Belt.

The Turpins proves that living and dying in the South are seldom tidy and always hilarious.

Not since “Steel Magnolias” has a more colorful and dysfunctional group of Southern eccentrics gathered below the Mason-Dixon line.

We encourage anyone who enjoys theater to consider auditioning.  If you are interested in being a part of the ACT Team, whether it is in set design and building, costumes, sound and lighting, stage help, or assisting during performances, contact Renee Mackey-Myler at jreneemyler@gmail.com.