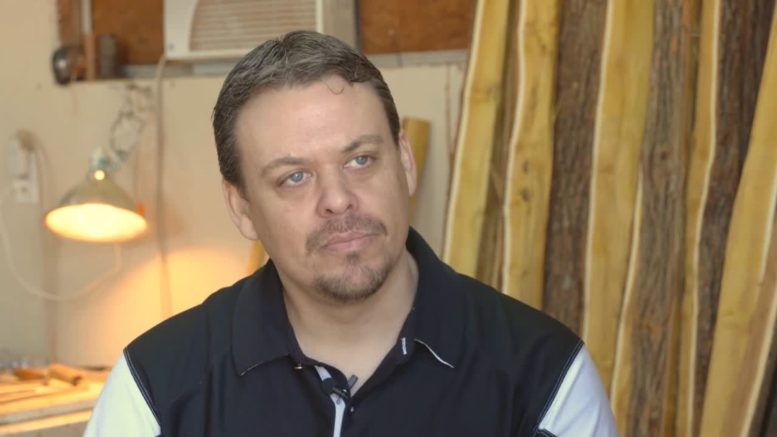 Ancient weapons expert Eric Smith’s meticulous descriptions of his tribe’s heritage, culture and traditions are a time machine taking people back to the 14th century.

A love of the Chickasaw people is dispensed with a flowing narrative concerning clothing, weapons, footwear, gorgets, quivers, bows, arrows and buckskin lavishly adorned with feathers and accoutrements, both utilitarian and fashionable.

Smith, a resident of Pauls Valley, is bringing something quite special – and extremely rare – to the Artesian Arts Festival May 25.

A full archery set, crafted solely with tools available to Chickasaws 500 years ago, will be among many items Smith will display.

“I’ve made a beautiful southeastern woodlands style bow, with genuine animal tendon and sinew string. I have crafted river cane arrows with all flint points. The bow has been treated in the ancient method by applying bear grease,” Smith said.

A brain-tanned buckskin quiver is included. Smith said the technique of brain tanning hides is centuries old and preserves the item almost indefinitely. “Turkey feathers are attached to the quiver using homemade glue from animals, just as my ancestors would have used.

“It is my wish people will appreciate the set. It illustrates what Chickasaws would have made prior to ever coming in contact with a European. It is something that is beautiful and functional. The set is powerful enough to harvest any animal in North America, yet made with all natural materials,” he said.

Hollywood’s Go-To Expert Smith’s expertise, attention to detail and dedication to replicating historically accurate ancient weapons has had Hollywood moviemakers knocking at his door for decades.

He made all the bows and arrows used in the thrice Oscar-award winning movie “The Revenant,” a 2015 film starring Leonardo DiCaprio, voted Best Actor for his part as mountain man Hugh Glass. Glass allegedly was horribly mauled by a bear in 1823 but miraculously survived the attack.

In fact, Smith said he just finished making weapons for another film but, as usual, the Chickasaw expert had little to say about his efforts due to confidentiality agreements with clients.

All his expertise, trial and errors, immense knowledge and laborious investigation are included in a book he wrote late last year that has become a “must have” for bowyers and historians.

“The Warrior’s Tools: Plains Indian Bows, Arrows and Quivers” was released in hardback December 2018. Smith said he will have the book – which recently was released in paperback – at the festival. He’ll be honored to autograph copies and discuss the task of writing a book describing a very complicated endeavor but penned so a layman may understand and utilize techniques to craft weapons.

“The book is doing well. It has given me the opportunity to meet people and to share what I have learned. I love that and am excited about it. Recently, we just finished a bow making class with five Chickasaw students. They made a complete, functioning weapon in four days using basic hand tools Chickasaws have used for hundreds of years,” the Pauls Valley resident said. “Seeing them succeed, seeing them learn and passing on our heritage thrilled me. Making a weapon in four days is remarkable. On the fifth day, we went and had fun shooting them,” he said with a laugh.

Thousands are expected to crowd this small southeastern Oklahoma community for the one-day Artesian Arts Festival, deemed one of the fastest growing Native American arts festival in the nation. It gets underway Saturday, May 25, throughout downtown Sulphur. Activities begin at 10 a.m.