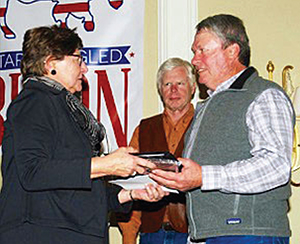 Dr. Gerald Parsons, DVM, (right) is presented the Member of the Year Award by the National Bison Association during the NBA’s convention in Denver. Presenting the award is Past Presidents Gail Griffin and Mike Duncan (center).

Dr. Gerald Parsons, DVM, (right) is presented the Member of the Year Award by the National Bison Association during the NBA’s convention in Denver. Presenting the award is Past Presidents Gail Griffin and Mike Duncan (center).

When Dr. Gerald Parsons, Stratford, was in veterinarian school he had a chance to work at the Wichita Wildlife Bison Park in Oklahoma.

“A chance for me to get out of the classroom was not going to be wasted,” Parsons told the Bison Review, the official newsletter for the Western Bison Association.

Parsons love for bison grew from that early encounter, allowing him to become in several bison associations and starting his own herd of bison in 1992.

Parsons’ work with the bison industry recently earned him the National Bison Association’s (NBA) prestigious Member of the Year Award.

The award was presented to Parsons during the NBA’s national convention in Denver this past spring.

Since that first encounter with bison, Parsons has become an expert on the Old West icon.

Bison producers from the U.S. and Canada have sought Parsons’ advice on how to deal with perplexing health problems.

Parsons is quick to point out that bison aren’t exotic animals, but instead he says they are native animals.

Parsons has been the International Director for the Canadian Bison Association (CBA) since 1994.

He is also the official zoo vet for the Anchorage zoo and travels there regularly.

According to the Western Bison Association, he has been instrumental in helping the CBA protect the plains buffalo in Canada from being placed on the endangered species list.

Closer to home, Parsons, along with a few other Oklahoma producers, founded the Oklahoma Bison Association.

Parsons began a Junior Judging Program at the Oklahoma Show and Sale in 2006 and has been instrumental in getting a national judging program.

Seven years ago the Western Bison Association started their Junior Judging Competition and Parsons very generously traveled to Utah to help set it up.