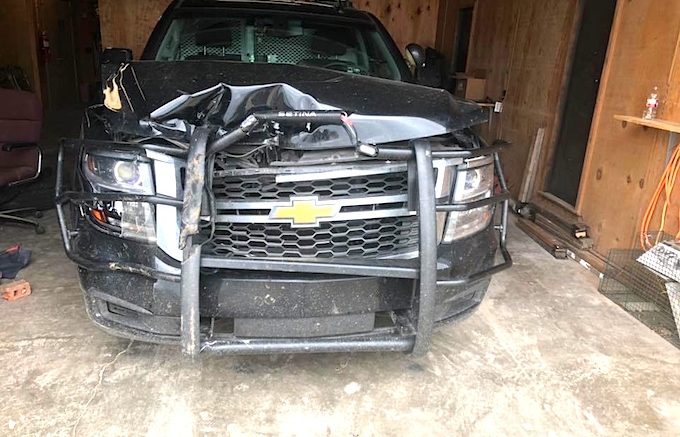 The Paoli Police Department is in need of cash and they need it fast.

The reason for the department’s cash strapped situation is the need to replace the Assistant Chief’s vehicle that was totaled when Quinn Wykoff backed into the car in an attempt to escape arrest for some outstanding warrants in Garvin County.

“Insurance has given us some money for the vehicle but it wasn’t enough,” said Paoli Police Chief Dustin Cook.

Cook said he won’t be purchasing an exact replica of the unit that was damaged due to the lack of necessary funds.

“We’re having to purchase a less expensive model,” he said. “On top of that we’re having to spend extra funds to have the equipment from the old vehicle installed in the new one.

“The problem is the equipment from the old vehicle doesn’t exactly match the unit we are purchasing.”

Cook said a local Paoli resident has started a Go Fund Me page for the police department.

“We appreciate the support we’ve been given since this incident happened,” he said.

During the traffic stop, Hutchings was informed that Wykoff had a valid felony warrant for his arrest.

As Hutchings went to arrest him, a fight ensued. Wykoff pulled a large knife during that altercation.

Hutchings unholstered his service weapon, causing Wykoff to jump inside of his truck to flee the scene.

Hutchings was able to retreat back to his patrol vehicle before being struck by Wykoff’s vehicle and attempted to pursue Wykoff.

Wykoff placed his vehicle in reverse and backed into the patrol vehicle at a high rate of speed, causing major damage.

Wykoff realized Hutchings was still chasing him, so he locked up his brakes and put his vehicle in reverse; attempting to ram the patrol vehicle a second time before leaving town limits.

The patrol vehicle was disabled and unable to pursue at that time.