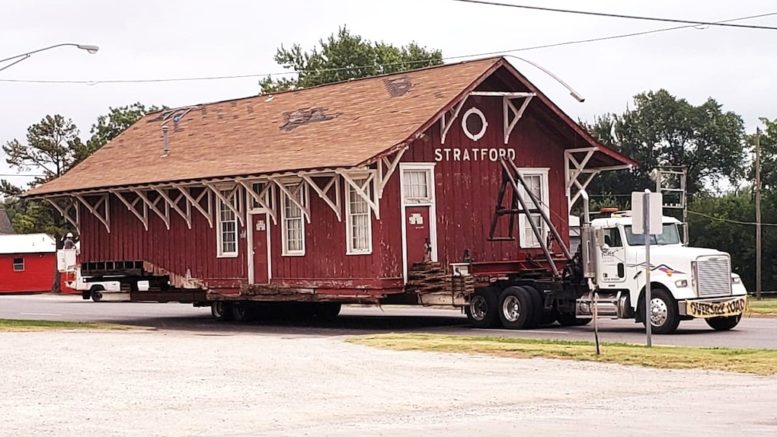 In September of 2018, Robert and Kristi Morton purchased the Old Railroad Depot from the Town of Stratford for $1500.

The building was built in 1906 and was used as a depot for the Oklahoma Central Railroad, and the town of Stratford built up around it. Many in the community voiced their disapproval of the town’s decision to have the building removed, but no other reasonable alternative was found. According to Town Administrator Shannon Tice, the town just did not have the funds to renovate the building, which had fallen into significant disrepair.

Under the stipulations for purchasing the building, it was to be relocated outside the town limits and the relocation was to happen within thirty days.

Due to the unprecedented amount of rain that fell on the area, the time limit for relocating the building was negotiated with the town. The family kept in contact with the town, concerning the delays caused by the unusual weather. Finally, on Monday July 22nd, the ground was dry enough for the building to be moved.

The move was quite an undertaking, due to the size and fragile nature of the building. OG&E workers were on hand every step of the way, moving powerlines along the route, as needed.

It was an interesting sight on Monday morning to see this town landmark on its way to its new location.

The Mortons plan on breathing new life into the historic building, so that it can continue to be a part of Stratford’s history.

According to Kristi, the building will be completely redone inside and the outside will be repaired while the historic aspects will be maintained.

“Robert has outgrown his office in town, so we will be remodeling the Depot to serve as his office,” said Kristi. “It will be accessible to those with disabilities and will allow more space for patients.”

Dr. Robert Morton is a psychiatry specialist. His office is currently located at 120 North Forrest Avenue, next to Unique Boutique. He shares his current office with his son, Philip Morton who is a lawyer.

The new home for the Depot is two miles north of Stratford on 177. It can be seen from the highway on CR 1510. It will still serve as a visible landmark for Stratford.

The Mortons are looking for a caboose to add to the property, in keeping with the railroad theme.