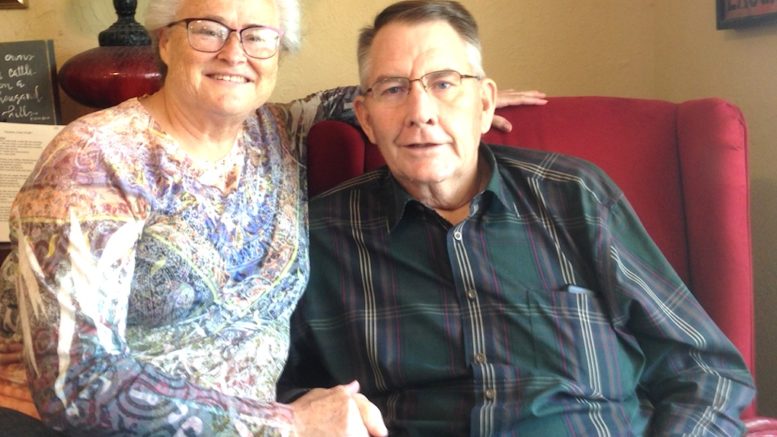 Becky and Steve Mayhan are shown in their rural Pauls Valley home. Steve recently came home after battling the COVID-19 virus for several weeks. Steve credits the love of Christ, his family and friends for his recovery. (News Star photo by Jeff Shultz)

That may sound corny, but Mayhan is living proof that the love of Christ, his family and the community are responsible for rescuing him from the jaws of death.

“I almost died twice,” Mayhan said, in reference to his recent battle with COVID-19.

Mayhan was released from a rehabilitation hospital in Shawnee, Oklahoma, last Friday, after spending several weeks in two hospitals as a result of the perilous virus.

“What I learned from this whole ordeal was that material things don’t matter,” he said, wiping tears from his eyes.

“What matters the most is my faith in Christ, my family and friends.”

Mayhan’s wife, Becky, believes Steve contracted the coronavirus by just walking by someone who had the virus.

That someone was Steve’s brother, Bruce.

“Steve didn’t hug him or come close to him because he knew Bruce was infected,” she said. “All Steve did was walk by him, and that was enough for Steve to catch it.”

Steve said he thought at first the virus would probably be as bad as the flu.

“Boy was I wrong,” he said. “I believe it when the experts say it’s three times more contagious than the flu.

“But I believe it’s ten times worse. I never was so sick in my life.”

During the early stages of the virus, Steve said every muscle in his body was in pain.

And then his breathing started to become shallow.

“That’s when Dr. Whitehouse told me to get to the Mercy Hospital in Ada,” he recalled.

With his condition worsening by the hour, doctors decided to put him on a ventilator.

At one point the ventilator was doing all of his breathing for him.

“That was the first time I almost died,” he said.

While Steve was fighting for his life in the ICU, Becky was giving family and friends daily updates through text messages.

Each text message would, at the end, have a specific prayer request.

“Please pray he will start breathing on his own.”

“The doctors have requested prayer for wisdom.”

She never once asked for any type of financial or material assistance.

But that is where the Garvin County community displayed how much love they have for the Mayhans.

“Some churches in the county took up a love offering for us. People brought us food, or they would fill up my gas tank,” Becky recalled.

After spending several days on the ventilator, Steve’s breathing started to improve.

The doctors decided to bring him out of sedation so they could see if he could respond to some simple commands.

“That’s the second time I almost died,” he said, noting he didn’t come out of the sedation as quickly as he should have.

Then one day an ICU nurse had an idea. She called Becky on Steve’s phone and held the phone up to his ear.

“When I heard her voice, I believe that’s when I started getting better. From that time on I began to really fight it,” Steve said.

Each day after that Becky would send long text messages to friends and family giving praise to God for the way Steve was improving.

Later, Steve would learn that only 3% of the coronavirus patients who get as bad as he was actually recover.

“I know God was watching over me,” he said tearfully.

Days after he awoke from sedation, he was moved out of ICU and then later moved from Ada to the rehab hospital in Shawnee.

When he came home on May 1, he was greeted with a full police escort through town to the cheers of friends and family standing on the side of the road, holding signs of adoration for Steve.

“When I saw that I cried like a baby,” he said.

Now, when he shares his testimony with others, he can truly say, “Love lifted me.”