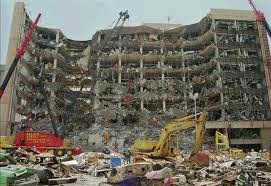 The bombed out front of the Murrah Federal Building. This Sunday, April 19, will mark the 25th anniversary of the terrorist attack. (archive photo)

Twenty-five years ago, on April 19, 1995, David Johnson, who currently serves as Garvin County’s emergency management director, was working as a safety manager at the Kerr-McGee Refinery in Wynnewood.

Like most Oklahomans that day, Johnson’s morning started like it usually did but changed drastically at 9:02 a.m. when Timothy McVeigh detonated a truck bomb in front of the Alfred P. Murrah Federal Building.

“Oklahoma City put out a call for emergency personnel, and I was getting ready to go up there when the plant manager came into my office and asked if I was going to the city,” Johnson, an experienced EMT, recalled.

He told the plant manager he was ready to go right then, and the manager told him to get on the road.

When Johnson arrived in Oklahoma City he checked in with the Red Cross, and they sent him to a triage station near the bombing site around 10:30 that morning.

“Our job was to treat any injured victims or firefighters,” he said.

Johnson and hundreds of other emergency personnel from the state flooded Oklahoma City that morning.

“I was a little surprised that all we basically had to do was treat one firefighter who had cut his hand on some metal at the (bombing) site,” Johnson said. “That’s just a testimony to how Oklahoma responded that morning.”

Johnson was assigned to a rehab station the next day, where he and other volunteers did health checks on emergency personnel at the bombing site. The station also was a resting place as the personnel came off their shifts.

Johnson said the one thing he will always remember was the “sheer violence” the bombing had on the Murrah building.

“I served in the military and I had seen bombing sites before, but that was the largest crater I had ever witnessed,” he said.

And, like every one in the state and nation, Johnson thought, “How could anyone do this to other people.”

It was a historic day in Oklahoma and the nation and, though Johnson was shocked at the “sheer violence” of that event, he was more amazed at the acts of generosity and selflessness shown by others.

“I was there only two days, but in that time, I saw people from all over the state and nation rush in to help,” he said.

“That’s when the ‘Oklahoma Standard’ was born,” he added.

Talk to anyone who survived that day, and they will share stories of heroism and kindness.

Former Governor Frank Keating recalls an incident where he was near the bombing site, thanking a group of emergency volunteers, when one of them approached him with a dollar bill.

He told Keating it was the dollar bill he brought to Oklahoma City, and he wanted him to have it because he, and other volunteers, didn’t have to spend one dime while they were there.

“That’s how well they were taken care of here,” Keating remembered.

Emergency personnel and journalists from across the nation all marveled at the generosity Oklahomans showed them during that time.

“On top of that,” Johnson added, “the people had a lot of respect for the volunteers and the job the law enforcement people had.”

Johnson said one FBI agent told him how amazed he was that the perimeter around the bombing site was just blocked off with yellow police tape.

“He said no one had attempted to cross over the tape to get a souvenir or a picture,” Johnson recalled.

One news network sent a film crew out on the first night of the bombing and told them to get footage of looting and other crimes.

The film crew came back early and when asked why they weren’t out doing their job they replied there was no one looting or rioting.

“There’s hundreds of more stories like that,” Johnson said. “It makes you proud to be an Oklahoman.”

Johnson said if there was anything good that came out of the bombing, it was how Oklahoma City handled an emergency of that magnitude.

“Oklahoma City already had an emergency plan in place in case a large tornado hit the city,” he said.

“They modified the plan some, but they were ready for an incident like that.”

Johnson said for 15 to 20 years after the bombing, emergency leaders from Oklahoma City served as guest speakers in other states and other countries, advising emergency personnel in those areas on how to plan for a major catastrophe.