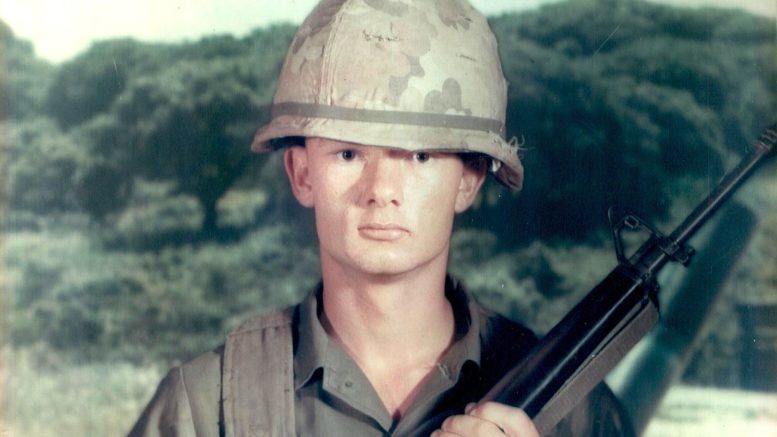 The funeral procession, an unusually long one for such a small little town stuck off from any major highway, inched down a narrow asphalt road toward the cemetery. It passed a house almost surrounded by purple iris and other pretty flowers I don’t know the names of. It passed the Maysville water tower which is white, except where various students have taken red paint on some nights and identified their particular class. Maybe Bill Chambers helped paint it once himself.

Inside the cemetery gate the pavement quit. The dirt began, wide enough for only one lane of traffic. The people parked where they could, then assembled for their last respects. This whole town closed. Everything. Absolutely everything. The business area, which would be lost in a larger city, was marked with flags which flapped in Tuesday’s sultry breezes. Even school was dismissed.

He turned to the barber, “My hair’s kinduva mess,” he said. “I guess whatever you can do with it is the best thing,”

Cars lined both sides of the street in front of the house Bill Chambers visited in last November. He was home for 16 days. He reported to the west coast. He called home soon after arriving there. He talked to Lawrence Chambers for 45 minutes. “I don’t think we’ll leave tonight, Daddy, and if we don’t I’ll call you again tomorrow night.”

He didn’t call back. He left for Vietnam.

It so happened he was here during a Veteran’s Day observance at the high school,  which is a low-slung structure on the other side of town from Bill’s house. He wore his army uniform and he participated in the observance at a school assembly. Chester Wohl remembers.

Mr. Wohl is a short little man who knows everybody in Maysville. He teaches typing at the high school. He taught Bill Chambers how to type one semester.

“He was a real conscientious boy,” said Mr. Wohl. “A hard worker. He wasn’t the best student in the world, but he always got his work in on time. He didn’t have to be pushed. He had initiative. He was well thought of by his class members.”

Bill Chambers’ picture is on page 32 of the 1968 Warrior, the school yearbook. He was a senior then. A fine looking young man. His hair parted on the left and draped down a little on his forehead on the right side. And he had sort of a twinkle to his eyes that day he posed for the yearbook picture. It’s the sort of pose guys use while knowing that in some future year various gals from that same class will get out the old yearbook and look at and eat their hearts out.

“His favorite subjects,” said Mr. Wohl as his present class pecked out imaginary business letters to imaginary firms, “were government and history. He always talked about different freedoms this country had and some the others didn’t. He always said he wanted to do something some day to help preserve those freedoms.”

Mr. and Mrs. Lawrence Chambers were notified of Bill’s death last Tuesday. He had been killed the previous Sunday. One of Bill’s buddies had been horribly wounded. A leg was gone. Bill loaded him into a helicopter. He patted his shoulder. “Everything’s going to be all right,” he told him. And it is. Apparently, it happened right after that.

Before the funeral Mr. Chambers stood in the front yard which fits against the modest white frame home. He sipped iced tea and smoked cigarets. He said if there was one word that described Bill it was “honest.”

Mr. Chambers recalled all the times he wrestled around with Bill and Paul Pratt, the best friend who now is in the army, too. “I never would let my boys throw a firecracker under me,” said Mr. Chambers. “I always made sure I threw it first.” He kinda smiled. “Bill and Paul there would get tough with me sometimes but I never would admit that to them.”

It was about time for Paul to go change clothes.

“Mr. Chambers, would you like for me to wear my army suit? Mr. Chambers said, “Would you like to, Paul?” and Paul said, “Yes sir. I believe I would.” Mr. Chambers said, “That will be fine. That will be just all right.” Paul left.
In a family photo album, which is kept on the shelf underneath the coffee table, Mrs. Chambers got the letter for me to read. It has been folded and unfolded many, many times since Bill wrote it only one month ago. It will be folded and unfolded forever. They let me read it:

“Dear Mom. As I sat here thinking of what happened last night and this morning, I just wonder what is happening to mankind these days. Was man put here on earth to destroy, to take the life of other men, and to commit the sins that everyone commits today?

“I just don’t think so. As I carried a wounded VC down to the log pad today I began to wonder about these things. I believe men were put here to love, not destroy, to build and carry on one’s life for the good of other people.
“As I looked upon the dead this morning I began to wonder if I could put my sights upon an enemy soldier and pull the trigger and take the life of another man like I did the other day. I don’t know, but as they say, ‘Time will tell.’ Or will it?

“I felt like laying my gun down now and just go home, but would that be right to these people here? Can one just leave and let the enemy go on beating and killing innocent people and run to the safety of home? I don’t think that would be right.

“I know I couldn’t run away from a problem and live with myself. I was not meant to be a coward and I will not be one. I will die before I disgrace myself and my family. I could not hurt any one of you. I am not that kind of person and I ask you all to forgive me for the worries that I have brought you.

“Mom, I believe you will understand this letter because it is the way I feel and I hope this war ends soon and with God’s help everyone will live in peace. Love always, Bill.”