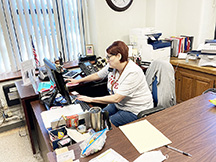 Garvin County Election Board Assistant Secretary Holly Levis answered voter questions by phone on Monday. Election Board Secretary Gayla Dean said her office has stayed busy answering voters’ questions ranging from where to vote to what COVID-19 safety measures were in place at polling precincts.

In the presidential race a total of 10,905 county residents cast ballots, a number Dean says she hasn’t seen since she started working at the election board.

“It started with the registrations, and then we had a huge number of requested mail ballots,” said Dean. “So, yes it was historic.”

Despite a large number of in-person absentee voters last week, almost all precincts in the county reported long lines of voters on Tuesday.

“We had a lot of people calling us prior to the election asking if they were registered to vote or where their precinct was,” Dean said.

In addition, Dean and her assistant, Holly Levis, fielded a large number of questions from voters regarding COVID-19.

“We had voters asking us if their precinct was clean and sanitized and what they should do if they’ve been isolated or quarantined by their doctor,” Dean said.