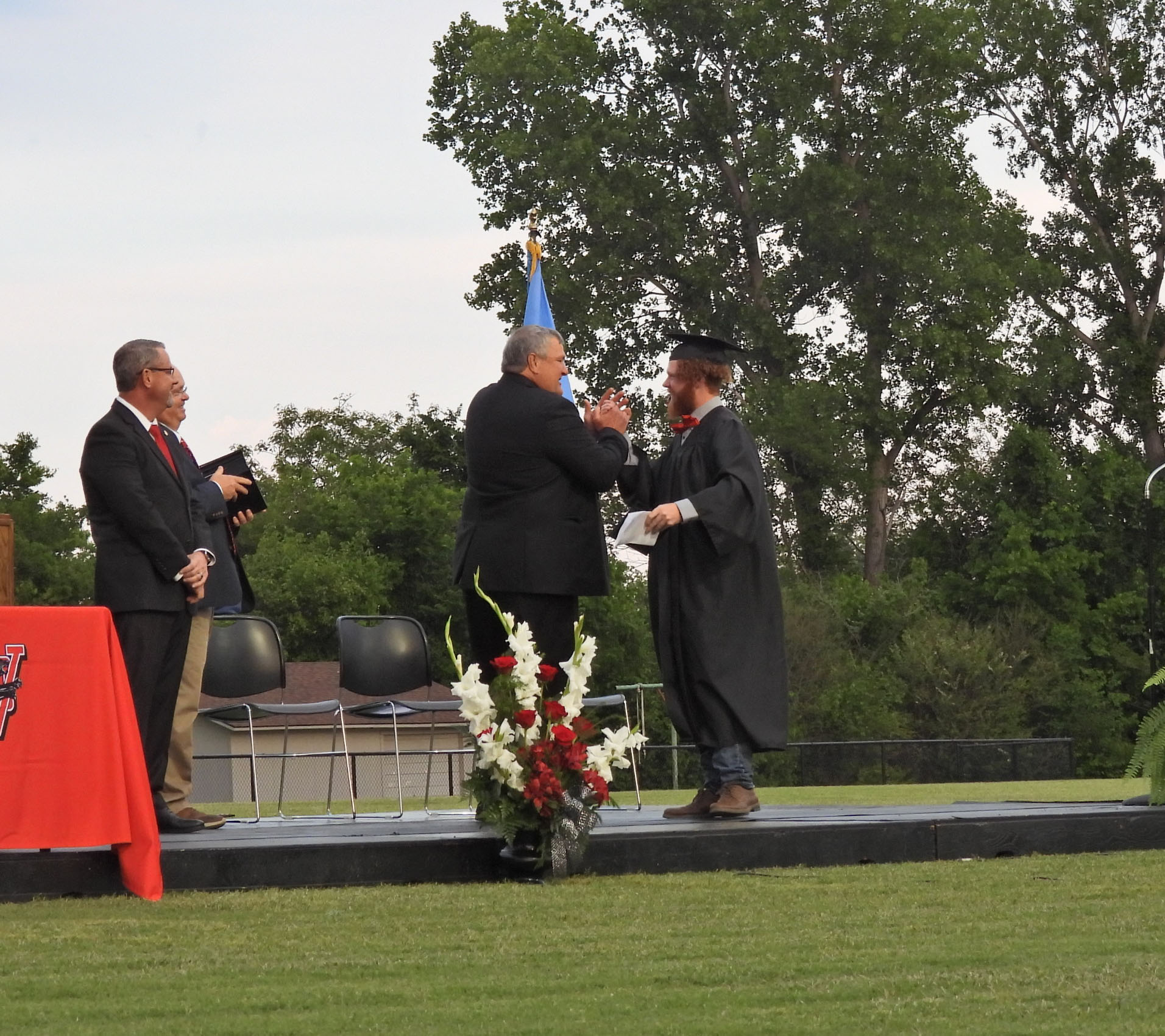 As Damon Gregg walked to the podium to deliver his commencement speech as Pauls Valley High School’s senior class president last Friday night, his family watched from the stands with emotions typical for graduation night: overwhelming pride and an appreciation of the hard work and perseverance needed to get to this point.

But for the Gregg family, the moment was punctuated by the fact that when Damon was four they were told he’d likely never speak.

“Shortly after starting school, Damon was diagnosed with autism,” his mother, Megan Gregg, said. At the time he could only say a few words. “Doctors told us he would probably not speak and told us to practice the picture exchange program to communicate with him.”

The program would essentially allow Damon to communicate by pointing to pictures of the things he wanted or wished to say rather than learning to form the words.

“Back then autism wasn’t talked about, and it was hard to get help,” Megan said.

They were sent home with a binder full of information and not much else.

After some family discussion, Megan said she and her husband, Adam, came to the decision that Damon had the ability to speak, and they didn’t want to hinder

him. So with help from his teachers, they began to work with him, helping him to find and learn the words he needed to express himself.

The journey to Damon’s speech at the graduation podium was full of years of hard work, speech therapy, excellent teachers and love.

“Pauls Valley has a great special education program,” Megan said, and she gives much of the credit for Damon’s academic success to the support and encouragement he has received from his teachers and school administrators through the years.

In addition to serving as senior class president, Damon is also the school mascot and was voted prom king by his classmates.

“He’s never let being autistic keep him from trying anything,” Megan said.

Those who know Damon will quickly tell you he is almost always positive and upbeat, cheering on classmates and encouraging those around him.

“He never wakes up in a bad mood,” Megan said. “He’s always just so sweet and kind.”

But Damon’s positive outlook on life, Megan said, often keeps people from realizing the struggles he faces on a daily basis and how hard he works to achieve his goals.

As Damon stepped to the podium to address his classmates at graduation, the first part of his speech was filled with all the things you’d expect to hear at graduation ceremonies this year: a recap of senior schedules and activities disrupted by the pandemic, how much COVID-19 sucks, and the desire to never have to don a mask again.

But then, Damon’s speech turned to the advice he wanted to give his classmates; advice that when delivered in his powerful and unique voice cut to the very core of who he is and how he has overcome.

First, show love and respect; be nice to yourself and others, he began. “We are all valuable and important.”

Second, “Just as Mufasa said in the ‘Lion King,’ ‘Remember who you are,’” Damon said. “Be more you! Don’t let life’s challenges define you. It is important to be you. Living outside yourself is exhausting.”

And finally, Damon said, life brings challenges, but we can choose how we will respond to those difficulties.

“I have autism, and my parents were told I would never speak,” Damon said, taking a deep breath to maintain his composure. “But look at me now.”