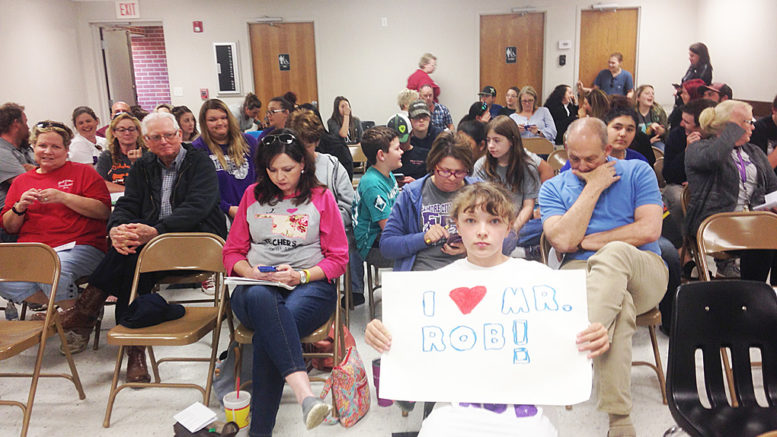 EC-P Fourth Grade student Christina Martin holds up a sign of support for Harland Robison prior to the special meeting to hear his appeal. Robison shocked supporters later in the meeting by resigning as EC-P Middle School Principal. (News Star photo by Jeff Shultz)

EC-P Middle School Principal Harland Robison shocked a crowded room of supporters Thursday night, April 19, by announcing he was resigning from his position.

“This isn’t the outcome we wanted, but it’s best for the community,” he said. “I hope in the future I can apply for a position with this district.”

The special meeting of the EC-P Board of Education was meant to be a hearing so Robison could appeal the non-renewal of his contract by Superintendent Jennifer Cruz and the school board. 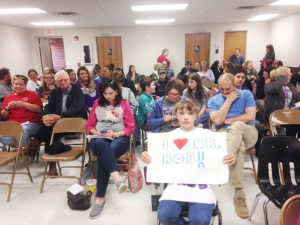 EC-P Fourth Grade student Christina Martin holds up a sign of support for Harland Robison prior to the special meeting to hear his appeal. Robison shocked supporters later in the meeting by resigning as EC-P Middle School Principal. (News Star photo by Jeff Shultz)

Robison requested the hearing after being notified earlier this month his contract would not be renewed.

Known as “Mr. Rob” by parents and students alike, his appeal hearing drew a large crowd of supporters Thursday night.

Some of the supporters wore t-shirts saying “I’m 4 Rob” and “I stand with Mr. Rob” on them.

The meeting was scheduled to start at 6 p.m. and shortly after that one of Robison’s attorneys, Matt Thomas, appeared before the crowd to announce that the district’s attorney and the board was meeting in executive session to hopefully negotiate his contract.

State law requires all executive sessions to be listed on meeting agendas.

When asked why the “executive session” was not listed on the agenda, Thomas said he didn’t have an answer to the question but just that the district’s attorney, Andy Fugitt from the Center for Eduation Law, said they could have one prior to the meeting.

According to EC-P Superintendent Jennifer Cruz both lawyers agreed to have a meeting prior to the special meeting in order to negotiate a suitable outcome.

“Both lawyers agreed to the meeting to try and work something out,” she told the News Star in an email this past Monday.

“Only two board members were in the meeting,” Cruz said.

At 6:49 Thomas came into the room and assisted a court reporter from Oklahoma City carry her equipment into the meeting.

At 7:15 Robison and his wife, Terresa, walked into the meeting room to cheers and applause.

Robison told the News Star the support he’s been getting was “amazing.”

“These are the best students and parents ever,” he said.

At 7:22 the school board convened the special session and voter to employ the Center for Education Law to represent them in matter.

Then the board announced they were bypassing the agenda items relating to Robison’s appeal so they could meet in the executive session listed on the agenda.

The board left the room for approximately 15 minutes and returned to reconvene in the open session.

The board then voted to “adopt findings of fact” from the executive session.

Superintendent Cruz then recommended the board renew Robison’s contract for the 2018-2019 school year, which the board accepted the recommendation.

At that point Fugitt pointed to Robison who stood up and faced the crowd of supporters.

“I want to thank everyone for the show of support they’ve shown me. However, I am submitting my resignation as Middle School Principal.”

The announcement shocked the crowd of supporters, who, just minutes before that, thought they were going to keep their beloved principal.

Robison was flooded with supporters who cried and hugged him.

“This is what’s in the best interest of the community,” he said.