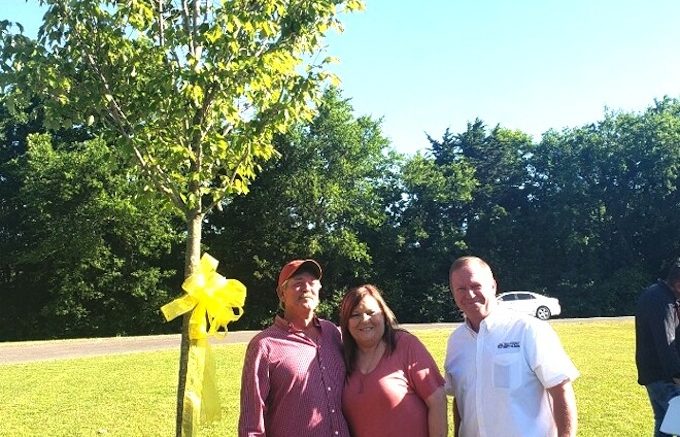 In July of 2018, Chris and Regina Dilbeck of Stratford suffered severe injuries after being involved in a two-vehicle collision. The accident was found to be the fault of the driver of the other vehicle, Austin Johnson. Johnson was driving under the influence at the time of the accident.
On May 22 of this year, in a courtroom hearing, the Dilbecks showed an incredible amount of forgiveness and mercy.
The Dilbeck family requested that Johnson’s 20-year sentence be dropped and that instead, he be able to get the mental and substance abuse help that he needs.
On June 11, a tree planting ceremony, sponsored by Oklahoma Heritage Bank, was held at Stratford City Park in honor of the forgiveness shown by the Dilbeck Family.
The tree is a summer red maple and will grow as tall as 20 to 30 feet. The red maple tree was purchased from a local tree farm in Wynnewood.
David Keith, CEO of Oklahoma Heritage Bank, opened the ceremony by stating, “Even though I did not know the Dilbecks personally, I was so moved and touched by their story that I knew I had to do something to acknowledge this incredible act of forgiveness.”
Sean McKinney, Pastor of Compassion Church in Stratford, followed Keith’s opening introduction with a prayer.
A plaque donated by the Stratford Chamber of Commerce was presented to the Dilbecks by Stratford resident Terry Gustovic. The plaque will be placed in front of the tree to commemorate their mercy and kindness in time of sorrow.
“I am proud to be part of this community and see the community come together to bring attention to something like this,” said Gustovic.
Fred Stephens, employee of Oklahoma Heritage Bank in Stratford, ended the ceremony by singing a beautiful rendition of the song “Amazing Grace” followed by a prayer.
Although the plaque has not yet been placed, the tree itself can be found on the east side of the Stratford City Park.