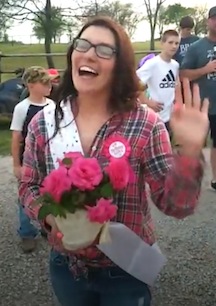 Tricia Holzbog-Wood turned 37 years old, and as a surprise, her friends and family organized a parade of over 142 vehicles to drive by her house for more than two hours to celebrate with her.

Tricia and her husband Josh Wood are long-time residents of the Stratford area. Josh is a Stratford fireman, and Tricia helps out at the Peach Pickin’ Thrift Store and cares for their three young boys.

In 2012 Tricia was diagnosed with a cancerous brain tumor and had surgery shortly after diagnosis. She was pronounced to be in remission for almost five years.

In 2017, another tumor was found, and Tricia was diagnosed with anaplastic astrocytoma, a rare, malignant tumor.

She underwent yet another brain surgery at the end of 2017 in which the surgeon removed her left temporal lobe and part of her hippocampus.

Following the surgery, Tricia underwent multiple rounds of chemo and radiation to fight this aggressive form of cancer. She has had trouble with her vision and hearing since the tumor was found.

Tricia is from Indiana, but in Stratford, she is known as a bubbly, friendly, kind individual who would help anyone.

“What is amazing to me is that I have lived here nearly all my life, and I don’t know half as many people in Stratford as she does, and she was raised in Indiana,” said Josh. “She talks to everyone!”

Tricia has been a driving force for the Stratford Historical Restoration Association. She is active in the public schools and in supporting the fire department.

Tricia loves costumes and dressing up, and, at Christmas, she dresses as an elf and reads stories and sings to children at the library.

She also has helped with the Peach Festival and is the organizer of the Peach Royalty Pageant each year. Her family has been supporters of and participants in the area rodeos all of her life.

During the parade in her honor, Tricia was sure to speak to each person who came by.

Her family and friends also organized a birthday card drive, and she has received well over 100 cards from her fans from Indiana and Oklahoma!

Tricia’s upbeat attitude and her infectious laugh, as well as her staunch support of Stratford, has earned her the love and admiration of many.