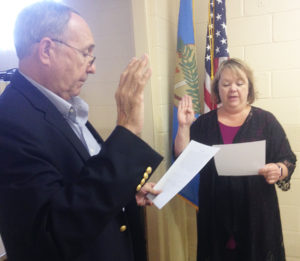 Deb Degering, right, takes the oath of office Monday night after being appointed to the Maysville Town Board seat once held by Bob Norton. This makes Degering’s second stint on the town board. Shortly after being appointed to the town board she was elected mayor. Administering the oath of office is City Attorney Dean Hart.
News Star photo by Jeff Shultz

Deb Degering had a whirlwind type of night Monday night. First, she was appointed to the vacant town board seat left open by Bob Norton’s resignation from the board.
She barely had time to catch her breath when the Town Board elected her to the mayor’s post during Monday night’s regular Maysville Town Board meeting.
Degering had once served on the board, but resigned from her council seat earlier this year.
Vice Mayor Cathy Nobles opened the meeting and marched through the agenda. After Degering was elected mayor, she asked Nobles to continue leading the meeting and she would take the gavel during the next town board meeting.
In other business, the board began the task of rebuilding the Maysville Police Department by hiring Zac Hearon as a new police officer at $11 per hour.
Hearon’s hiring will give new Police Chief Aaron Glass some much needed relief since he took over the department after former police chief Bill Koscher and two other officers resigned from the force two weeks ago.
“I’ve been putting in a lot of hours,” Glass told the News Star.
Board members also approved the purchase of the ODIS crime reporting system for the police department.
Glass explained the system will now connect any warrants or reports generated by Maysville with law enforcement agencies in the county.
“Every police department in the county is on ODIS, except for us,” Glass said. “With this system in place, Pauls Valley will be able to see if we have a warrant out for someone they stop in Pauls Valley. Right now they can’t get that information.”
Cost of the system will be $6,400 for a one-time purchase with an annual fee of $1,500.
Town board members approved the purchase provided the police department has enough money in its budget.
The board also made departmental assignments with Degering taking the office and library; Nobles taking the streets and parks departments; James Lindig managing the fire and sewer departments; Earl Morton will be over the police and cemetery; and David Uhles will be responsible for lakes and solid waste.
Board members approved new hours for the library. At the first of the meeting the board heard from library board member Bobby Lou Williams.
Williams told the board the library needs to be opened on Mondays due to the fact so many people in town use the library’s computers to conduct business and take online courses.
Williams said the library board was recommending the new library hours to be from 8-5:30 Monday through Thursday and 8-Noon on Friday.
She added that closing the library on Monday resulted in a reduction of revenue for the library.
Town Board members said they would like to see the library open on Saturdays due to the new summer nutrition program the library is participating in and they didn’t want kids in the town to miss getting some type of meal.
The new operating hours for the library will now be 8-1 on Monday, 8:30-5:30 Tuesday through Friday and 8-Noon on Saturday.
Town board members also took action on improvements to the drainage problems on 8th Street. Board members approved up to $5,000 for the project.
However, Uhles said it would not cost that much to make the improvements needed.