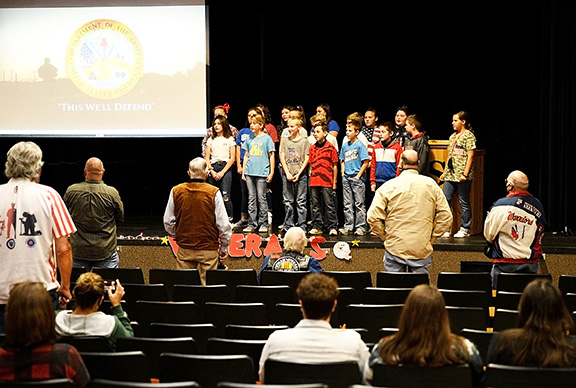 Fourth and fifth grade students from Robin Langley’s history classes at Stratford honored veterans from all branches of the military during a Veterans Day program Wednesday. (News Star photos by Beth Hobson)

Darrel “Butch” Bradley joined the Air Force as a young man in 1958 because he wanted to serve his country, but also because it afforded him opportunities a young man from a small town in Oklahoma might not otherwise have.

“I felt an obligation to the country. I felt like I owed something. And the other thing was I wanted to travel. I was single and didn’t have a serious girlfriend, and so I wanted to travel,” Bradley said. “And buddy, I did!”

After completing basic training at Lackland Air Force Base in San Antonio, Texas, Bradley’s service took him overseas and he spent most of his time in Europe and North Africa, where his orders took him to Aviano Air Base in northern Italy, to Berlin, Germany, and to Libya for a short time.

Bradley said he quickly learned the military will assign you where they need you, utilizing you the best they can. He was supposed to be an aircraft mechanic, but he never touched a plane. Instead, he was assigned to munitions.

“The military is a good place for a young person. It was good for me, it kept me out of trouble, and I got to do a lot of things I would never have been able to do,” he said. “I think I’ve been to 13 or 14 different countries, and I would have never got to do that. I was all over Europe and North Africa, and Bermuda and England, there was a lot of different places – and it was good. I liked it in there. They were good to me, and I had lots of good friends.”

But as important as his military service was to him, when it was time to reenlist, Bradley decided he had had enough.

“I liked it, but I’d just about liked all of it I wanted,” Bradley said, chuckling.

Instead, he chose to return home to Garvin County, find a wife and start his family.

“That was so important to me. That’s the main reason I didn’t re-enlist,” he said.

“I was glad to get home. I come home, and I ended up meeting Evelyn (his wife) and that’s the end of the story,” Bradley said.

But not really. Years later, he would meet and become friends with fellow Air Force veteran Jim Korzan, who was also living in the Stratford area. Originally from South Dakota, Korzan served two tours of duty between 1970 and 1976 with Air Force special ops in Vietnam.

“The first tour was all right. The second tour almost got me killed,” Korzan said.

He returned to the United States at the end of the war in 1975 with injuries that kept him in and out of hospitals for nearly 15 months. He returned to South Dakota for a while, spent some several years in Lubbock, Texas, and eventually settled in Stratford in the early 1980s.

Korzan and Bradley got to know one another through common associations around the small town and through activities at the American Legion post there.

“All us vets usually wind up around one another,” Korzan said. “Vets hang around with vets.”

Korzan actually started his military career with the Marine reserves. He said as the war in Vietnam intensified, his plan was to be drafted into the Marines. But then a cousin convinced him signing up with the Air Force would put him in a better position.

“He said, ‘if you go into the Air Force you’ll get a roof over your head, and sheets on your bed.’ You know, he said ‘a lot better deal. You’ll be digging holes for the next two years if you go into the Marines.’ So, I said, ‘well that makes sense.’”

Korzan went through basic training at Lackland Air Force Base, like Bradley did, but then he went through nearly a year of intensive training that included Vietnamese language classes, Ranger school, multiple parachute jumps in a variety of conditions and terrain, jungle survival and POW and Escape and evasion training.

He spent time at Nakhon Phanom Air Base in Thailand, near the border with Laos, flying mostly rescue missions.

Those rescue missions connected Korzan to another Stratford veteran, though he wouldn’t realize it until years later.

“Ronnie Johnson was out of Tinker, here. He was with the electronics – radio. We were triangulating bomber runs into Hanoi. They were on top of a mountain in Laos (a radar site). They were fixing to get overrun, we went in and got them out of there,” Korzan said.

Korzan, who didn’t know Johnson at the time, rescued two men that night. One was Johnson.

When the two met up years later in Stratford, Johnson remembered Korzan and recounted the story to him.

As Bradley and Korzan sat together in the living room of Bradley’s daughter’s home earlier this week, exchanging stories and recounting their military experiences, they both reflected on the importance of having a strong military.

“I really liked the Air Force. I did. I’m pro-military to this day – any branch. Because I think it’s so important that we stay strong, that we stay ready. That’s our best defense: to be ready,” Bradley said.

“I know. It bothers me, too,” Bradley agreed.

They also shared a love of the country they served to defend, and an appreciation for times – like Veterans Day – set aside to remember and reflect.

“Let them say what they want to about the United States, but we should be proud of this country. We have by far the best of all of it,” Bradley said. “There’s some of these other countries that aren’t bad, but they are not like the United States.”