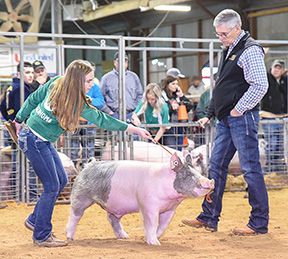 A much smaller Garvin County Fair will get underway next week, consisting of only livestock shows, due to the current COVID-19 pandemic. The shows will be held August 28 and 29.

Garvin County Fair Board members have wrestled with whether or not to move forward with a county fair this year, as coronavirus cases have continued to increase statewide.

Surrounding counties Pontotoc, Murray and Carter had already cancelled their fairs altogether, while McClain and Cleveland counties are still in the process of planning their fairs with significant modifications.

Oklahoma State Fair officials announced the cancellation of the state fair in late June, and the Tulsa Fair announced last week that all events are cancelled at their fair with the exception of the Junior Livestock Shows.

With the state fair scratched, which is where most county FFA and 4-H members in our part of the state would take their county fair exhibits and livestock projects, there was some concern the county fair would face a similar fate.

Those concerns deepened when members of the county’s Oklahoma Home and Community Extension (OHCE) clubs, who make up a large portion of county fair volunteers, were advised not to participate this year as ensuring limited exposure was not feasible with such a large gathering.

Statewide, counties are mostly split fifty percent, either cancelled or livestock shows only. Very few are including indoor exhibits.

All other events will be held at the county fair ground’s show ring. Precautions will be taken to maintain social distancing, and hand sanitizer stations will be provided. Below is a full livestock show schedule.