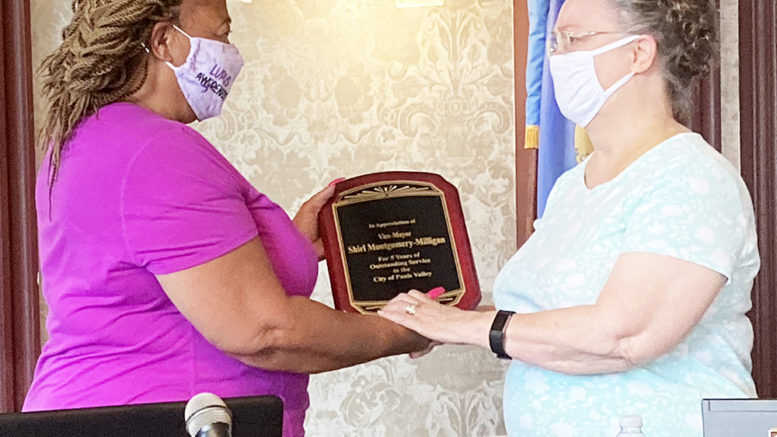 Pauls Valley Mayor Jocelyn Rushing (left) presents a plaque to Vice Mayor Shirl Montgomery-Milligan Tuesday night to commemorate her five years of service on the PV City Council. Montgomery is moving to Stratford and had to step down from her post on the council. Tuesday night was her last meeting at the council horseshoe. (News Star photo by Jeff Shultz)

There will be a full council when the Pauls Valley City Council meets next month. Two appointments to the council were approved to fill empty seats Tuesday night during the council’s regular meeting.

Eric Smith was appointed to fill one position on the council, and Chip Pearson will fill the other open council seat.

Current council member Shirl Montgomery-Milligan is leaving the council as of Tuesday night’s meeting. She announced at the council’s July 14 meeting that she is moving to Stratford and is resigning from the council.

“At first we thought I could finish out my term, and then I couldn’t run for re-election. But Jay (Carlton, city attorney) – being the fine attorney he is – looked into it and said state law prohibited me from continuing on the board once I moved,” Montgomery told the News Star.

Montgomery-Milligan said she originally wanted to be on the council to help people with various problems they were having in town.

“I’d have someone tell me about someone dumping trash in a ditch, or they would express the need for a stop sign somewhere,” she said. “So, that’s why I ran for a council seat in the first place.”

She said her greatest heartache was when the hospital closed. It was Montgomery-Milligan who wept as she made the motion to close the hospital in October of 2018.

“I wish I could have stayed on long enough to see the hospital reopen. I believe this new bunch (Southern Plains Medical Group) is going to eventually get it open,” she said.

Montgomery-Milligan was honored Tuesday night by the city and her fellow council members. She was presented a plaque commending her for her five-years of service on the council.

“I just want to give all the glory to God for allowing me to work with such a professional group of people. The whole city staff and administration and my fellow council members have been such a blessing to me,” she said tearfully.

“I really want to say that you folks have a great council, and they sometimes are criticized by people who don’t know what they are talking about.

“All in all they have conducted themselves in the highest professional manner, and you should be proud of them.”