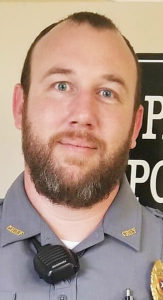 Former Stratford Police Sergeant Dustin Cook started as the Chief of Police of Paoli on Friday.
Cook began his law enforcement career in September of 2013 at Valley Brook, Oklahoma. He came to Stratford Police Department in 2015 where he worked under former Chief Steve Brooks and for a short time under current Chief Adam McMillen. He was certified as a K-9 handler in 2016 and helped to train Stratford’s current K-9, Maverick.
During his time at Stratford, Cook implemented the K-9 program, funding it by enlisting cooperation with the community and individuals such as Barry Switzer. With Maverick, Cook helped to apprehend drug suspects across Garvin County, assisting with the Sheriff’s office and other agencies when requested.
Cook resigned as a Stratford Police officer in February, after some conflicts with his move to the Pauls Valley area were brought by McMillen and he was removed as the K-9 handler for Stratford.
Cook’s wife, Lauren Patchell, also a former Stratford Police Officer is now a reserve officer for Paoli. She preceded Cook in the move to the department after being dismissed from Stratford’s department.
Cook was preceded as Chief of Police by Michael Lewis who left to be closer to his parents in Mayes County.
Paoli’s population is around six hundred but traffic from the interstate has brought the town a drug problem, which is one of the first things Cook plans to work on. He also plans to add a part-time officer to his team, as he is the only full-time officer and currently relies on his four reserve officers to help him fill in the gaps.
“My part-time officer had to go to reserve, due to health issues so I will be looking to fill that position as soon as I possibly can,” said Cook in an interview Monday.
Cook would like to expand the department, adding another full-time officer and possibly adding a couple more reserve officers.
“We need to have two officers to cover the town more completely,” said Cook. “Right now, any call that comes out, I’m the one who gets it. The reserve officers are a great help but they are unpaid and volunteer their time to help the community.”
Cook and Patchell have one child, Creed who just turned one year old. They currently live in the Pauls Valley area but are building a home near Paoli.