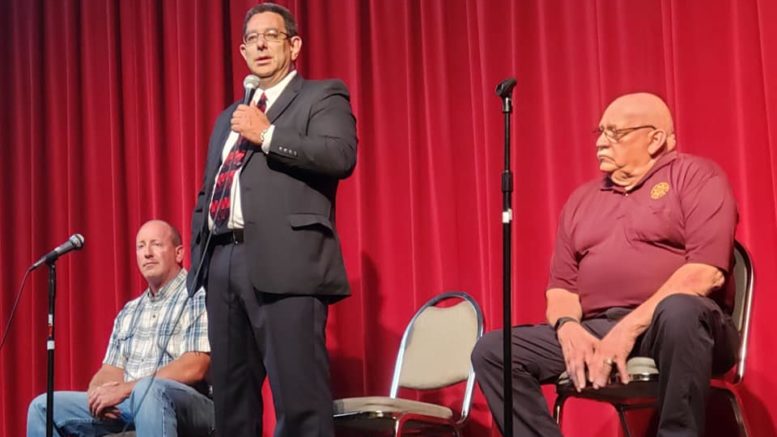 Three Garvin County Sheriff candidates answered the public’s questions during a candidate forum on Saturday night.
The forum was hosted by Garvin County Republicans at the Pauls Valley High School Auditorium. Candidates Tony Rust, Shane Rich and incumbent Jim Mullett were present at the event. Candidate Dan Deal was not present.
Four of the 11 questions focused on the sheriff’s office budget, including what new technology candidates would buy and implement to provide a more efficient and effective sheriff’s office, if elected.
“Our guys make a wish list of everything they’d like to have, but in reality, we have to look at budget,” Mullett answered first. “I’d love to have new computers in our vehicles, but we also have to have cars that run.”
Mullett hopes to implement investigative technology with the budget funds.
“We’re looking at some new technology right now to help with sex crimes,” he said.
“I’d like iPads in our vehicles so we’re not holding up a command center to run a tag number, some good computers, schooling and training.
“All those intertwined will help our guys become better investigators. I want to be out there solving and investigating crimes quickly and easily.”
Rich answered next and said he hopes to implement technology that will reduce time spent in the office.
“Laptop computers would be an asset because, when you handle things in the county, it might be 35-45 minutes away,” Rich said. “You can document the things that you do, save it to your computer and upload it when you get to the office which saves a lot of time.”
If elected, Rich plans to use grants to save money.
“There are grants you can apply for that are pretty easy to come by to help assist these agencies, because they know the budget is limited,” he said.
Rust plans to work with city councils and county commissioners to acquire funds for new technology. “They are the ones who control the budget, and everything you want has a price tag on it,” Rust said. “I know a lot of places you see across the state have some industries that will buy bodycams for all the officers. I have been back in Garvin County for three years, and I don’t know if any can afford that right now…that’s the main thing, the cost of all this stuff. It would be nice to have body cameras, it would be nice to have computers in the vehicles, but I can’t think of anything else that you can get that wouldn’t cost lots of money.”
Another question regarding budget was how candidates plan to achieve adequate law enforcement staffing amidst rural challenges of working conditions, salary and recruitment issues.
“That falls back into budget again,” Rich said. “Adequate staffing…it’s hard to get enough people to serve communities no matter where you work, but I believe there are things out there to help the hiring process.”
Rust agreed, but said programs that benefit the hiring process are too expensive.
“It all boils down to county commissioners; they want to hear that what you’ve got, you can take care of,” he said. “Everybody can find something else that they want and feel like they need it, but you’ve got to convince the city council or commissioners to bring forth the money for that stuff.”
Mullett disagreed with both candidates.
“We are confined by constraint of budget, [but] we’ve got good people in our office who aren’t being paid what they are worth,” Mullett said. “If I can pay them what they’re worth in order to maintain staffing, then I will look at our budget and think outside the box. I don’t want to just live off what commissioners give us; I want to be able to get some money and continue to hire and maintain what we’ve got.”
Mullett said his goal within the next fiscal budget year is to hire another deputy.
“It’s going to be hard, and we might have to print on both sides of the paper instead of one side, but we are going to tighten some strings, and that’s how we’re going to make it and get people to stay…treat them well and pay them what they’re worth.”
Other questions asked at the forum included candidates’ ability to provide leadership, integrity, accountability of officers to enact reasonable and necessary force and jail improvements.
The Garvin County Sheriff election will be June 30.