Steven Brooks came on as Chief of Police for the town of Stratford in May of 2015 and he intended to stay until he fully retired at the age of 65.
“Law enforcement is a young man’s game, I realized,” said Brooks Wednesday in a phone interview. “I want to leave while I am at the top of the game.”
Brooks has been in law enforcement for several years, starting at the Garvin County Sheriff’s Office in 1998 as a reserve deputy.
“I went into that job with the goal to become Sheriff some day and I achieved that,” said Brooks.
He worked for the private sector after he lost his re-election campaign in November of 2010.
“I came to Stratford to improve the police department,” said Brooks. “I wanted to make this department the best of its size in the state. I believe we are well on our way to that.”
Since becoming Chief, Brooks, with the help of the city administrator and the town board has received at least 10 grants, purchasing new body armor and new body cameras, as well as new radios and miscellaneous equipment to bring the department up to date.
“We are the only agency in Garvin County that has body cameras for every officer,” said Brooks.
Through a Certificate of Deposit program implemented several years ago, the department also recently purchased two new police units.
A K-9 officer was also added to the force and has helped to increase drug arrests in the area.
The property room was brought up to state standards and the inventory was corrected and catalogued.
The department also began to use the Offender Data Information System (ODIS), a comprehensive law enforcement and municipal court records management application. That system allows all records to be on file and to be accessible to every officer.
Brooks focused on community relations, instructing his officers to make a specific number of contacts with people each day.
“When I got here people told me that they felt like some of the officers didn’t care about the community,” said Brooks. “I believe that feeling has changed for most of the residents of the town. I tell my officers, we have to focus on helping people and doing our jobs. We have to buy into that completely or people sense that. We now have community policing where people are coming to us to report illegal or suspicious activity. Our officers are well liked by most people in the community. That’s a great accomplishment.”
Brooks also focused on making sure all his officers were highly trained, even more than the twenty-five hours of continuing education required by the state.
“Things are always changing in law enforcement and we have to keep up with that,” said Brooks. “In order to stay sharp, we have to learn new things every day.”
Brooks ran the police department in a way that fostered trust between the officers and community.
“This is not a dictatorship,” said Brooks. “I am interested in the goals and ideas of my officers. You can’t just have one plan of action; you need several in case the one you picked didn’t work. It takes all of us working together to protect and to enforce the law. There are good people in this town. They may sometimes break the law, but they are still good people.”
Brooks praised the town board and all his staff for making his time as Chief of Police of Stratford a pleasurable one.
“The town board has been a joy to work for,” he said. “We have worked as a cohesive unit, not different departments and a board that demanded we do things. The relationships that I have made are ones I will continue to cherish.”
Brooks plans on recommending his Assistant Chief Adam McMillen to the board for the Chief’s position.
“We have the same mindset of wanting this department to improve and wanting to continue to make Stratford a great town,” said Brooks. “Adam is a good, young officer who loves Stratford, loves his job and wants to help lead the officers to protect and serve in a cordial, professional way. He’s been a chief before and I think he is a good man for the job.”
Brooks said he plans to spend more time with his wife, Staci, their two children and his grandchildren.
“I realized there was more that I needed to do to be able to fully retire and this is the right time to start something new,” Brooks said. “I feel like I have accomplished here what I needed to and I am leaving the department in great shape. I turned fifty this year and full-time retirement is just around the corner. I want to leave at the top of my game and I have found a job where I can share my leadership abilities.”
Brooks will be a service advisor at Seth Wadley Dodge in Pauls Valley. His last day as Chief will be November 17th.
“Working here has been one of the greatest experiences in my life. These last two and a half years being in Stratford has been a blessing,” said Brooks. “Stratford is a great community and they deserve the best. I am not going to be the chief anymore but I am still going to be here for the community and for my friends.” 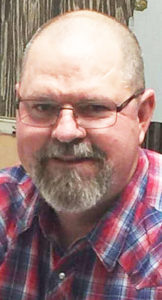