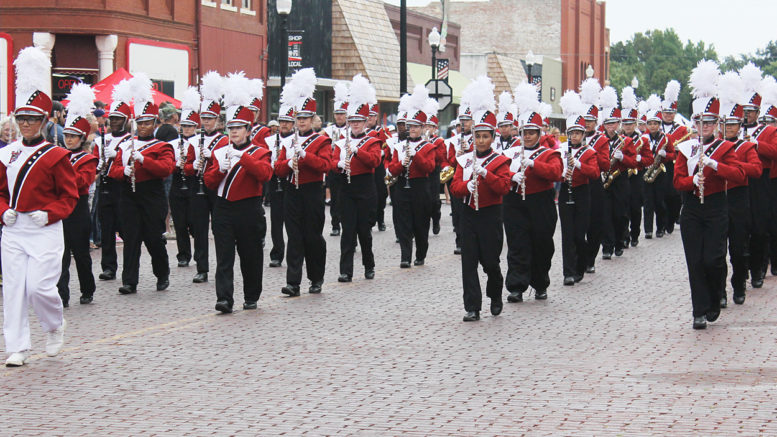 The Pride of Pauls Valley High School Marching Band marches during the parade competition at last year’s PV Marching Band Contest, which is one of three big events all on one Saturday in late September. The band competition is held in conjunction with Brickfest and the PV Police Car Sbow. This year’s event, which will be the first festival to be held in Pauls Valley since the pandemic hit Pauls Valley and Garvin County, will be held on Saturday, September 26. (News Star archive photo)

Plans are moving forward for Pauls Valley to host the annual Brickfest, PV Police Car Show and the marching band contest at the end of September.

During Tuesday night’s Pauls Valley Tourism Board meeting, the board approved funding requests for all three events slated for Saturday, September 26.

Pauls Valley Band Director Drew Etheredge told the tourism board he has been fielding calls from other high school bands in the state, asking if Pauls Valley was still going to have the marching band contest.

“Some of the schools were asking about our contest because their contest was canceled due to coronavirus concerns,” Etheredge said. “We already have five bands entered.”

“I’ve been telling them that for now we are planning on having the contest, but we’ll just have to see once school starts back up,” he added.

The tourism board approved the $3,000 funding request, which normally goes toward trophies for the participating bands.

Board members also approved an $8,425.25 funding request from the city of Pauls Valley and the Pauls Valley Police Department for Brickfest and the police department’s car show.

Since all three events are outdoor events, social distancing will not be a problem, tourism board member Cathy Tillery noted.

“We may have to enforce some social distancing at the football field during the field competition of the band contest, but I don’t see that as being problematic,” she said.

“Right now we are planning on having Brickfest and the car show,” City Manager James Frizell said. “Of course that could change if we start having a major COVID outbreak.”

In other business, board members approved a funding request from Pauls Valley Police Chief Mitch McGill to replace a dock at Longmire Lake.

The dock is severely damaged and the Oklahoma Wildlife Department will pay 75% of the cost to replace the dock.

“That money comes from a matching funds grant where we pay to have the dock replaced and the Wildlife Department will reimburse us for 75% of the cost to replace it,” McGill told the board.