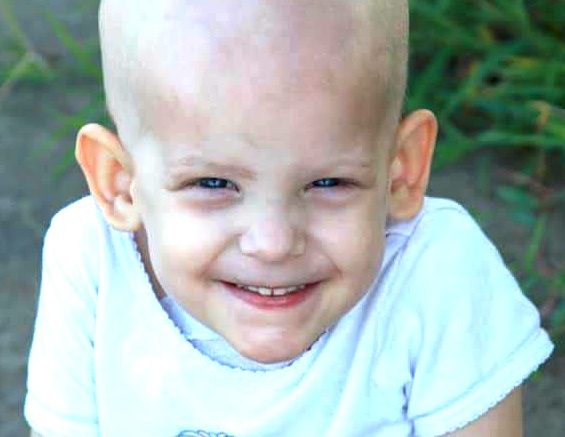 Two-year-old, Amelia “Millie” Joy Mount, daughter of David and Courtney Mount of Byars, Oklahoma was diagnosed with stage four neuroblastoma back in June of 2019.

Neuroblastoma is a rare and aggressive form of cancer that is usually found in children five years old or younger.

According to Children with Cancer UK, “Neuroblastoma has one of the lowest survival rates of all childhood cancers, with only sixty-seven percent of patients surviving to five years.”

Despite the odds, Millie’s family is committed to continuing to fight for Millie and her miracle of healing.

Millie has no shortage of familial support as she is the youngest of David and Courtney’s nine children consisting of six girls and three boys. Millie is also an Aunt to four nieces and one nephew.

A cancer as aggressive and severe as Millie’s, is treated with intense chemotherapy treatments, radiation, immuno-therapy, surgery, and a double stem cell transplant. The treatment plan for Millie is over a year-long.

Millie has already had four rounds of chemotherapy treatments and began her fifth round on Tuesday, October 1.

Millie’s next step is an abdominal surgery in late October to remove her primary tumor.

So far Millie’s medical bills have totaled around $400,000. Although the family does have health insurance that covers many of the medical costs, it does not cover gas to the hospitals and treatment facilities, meals for the family, etc.

Because of the financial and emotional toll the disease and subsequent treatments are taking on the Mount family, there are several fundraisers that have been put into place by local businesses to help support the family throughout this process.

Personali’Tees’ located at 110 North Forrest in Stratford, has started printing and selling “Millie’s Miracle” T-Shirts as a part of the store’s “Personali’Tees’ with a Purpose” program to help raise money for the Mount family.

There is also a “penny drive” where you can donate as little or as much as you would like to help out Millie and her family. To donate call, or visit any BancFirst location and ask to donate to the “Millie’s Miracle Benefit Fund.”

For updates on Millie and her medical condition, there is a Facebook page that has been setup for that purpose called “Millie’s Miracle.”

“We are so incredibly grateful for each person that has supported Millie’s Miracle within the last few months,” the Mount family states, “We may never even know the names of many of the people who have been so generous to our family but are so thankful for, not only the financial support and care packages but, most importantly, all of the encouragement and prayers we have received, as well.”